Tottenham based charity Haringey Shed specialise in inclusive theatre for children and young people aged seven to 25. Established in 2000, they are well embedded within the Tottenham and Haringey community. We spoke to their Company and Volunteer Manager, Ashling Foat, to find out what they’re about and what they’ve been up to.

Haringey Shed were born out of a project that an inclusive theatre company, Chicken Shed, ran in Northumberland Park School. They developed the concept that a disabled actor should have the same opportunities, and should be part of the same cast, as a non disabled actor.

If they are working on a large scale project, they hire a bigger performance space like the Haringey Sixth Form Centre, where they ran their summer programme, or the Bernie Grant Arts Centre. ‘We try to provide professional performing arts opportunities to young people. It’s very important to, if we can, hire a theatre which has a box office, and gives the young people backstage dressing rooms and separation from the audience. It’s really important to us that they feel professional and that their work is really valued.’

Ashling, who initially joined the team as a volunteer in 2010, works alongside two other full time members of staff: Eddie Latter, the Artistic Director, and Jim Shepley, the Executive Director. As well as this, Haringey Shed often bring in freelancers and session workers for specific projects and activities. They also work with over 100 volunteers each year. ‘Our volunteers start at age 13 and we’d consider a volunteer up to age 25. We also have a vulnerable adults and a supported volunteering programme which means adults with disabilities can also come in and work with us.’

‘What I really love is Haringey Shed is sandwiched completely by volunteers. They’re the core of what we do and we couldn’t exist without them… Everyone has a part to play, we’re all helping each other and no one’s owed anything.’ 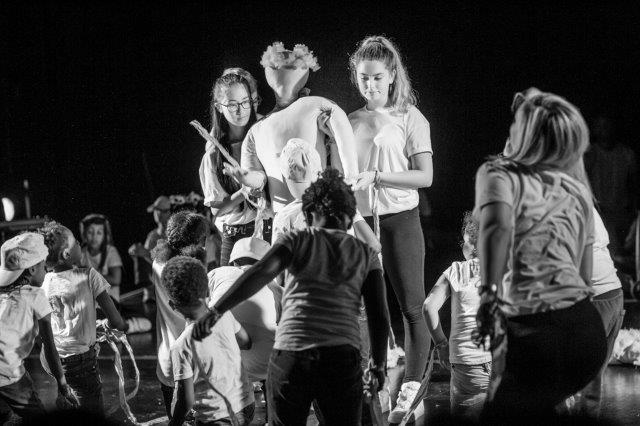 Haringey Shed run after school clubs and holiday programmes and activities. Two key projects are the youth theatre and the children’s theatre which also form part of their summer programme. During term time, their programme runs for four nights a week and they offer a range of activities including the youth and children’s theatre groups, singing, acting, dancing and music making. They also have an older performance group, 1419, who work on more challenging techniques and subjects.

Other activities have included fun days out and accredited arts award training for the young people.  They also recently finished a year long programme with West Green Primary School. ‘The school needed their young people to be more vocal, using language and communication, so they partnered up with us.’ They ran weekly sessions and each year group put on a show exploring a key subject.

Haringey Shed also took part in a project with Levi’s and Skepta at the Selby Centre last year. ‘We were lucky to be the local partner. Our job was to find the local young artists, recruit them and then support them in attending the programme. There was a studio kitted out completely by Levi’s and Skepta was the artist. Over twelve weeks, twelve young musicians were tutored, coached and developed. At the end of the 12 weeks, they performed at the V&A which was just amazing.’ The recording studio, that was set up in the Selby Centre, will be there and available for use until the end of the year. 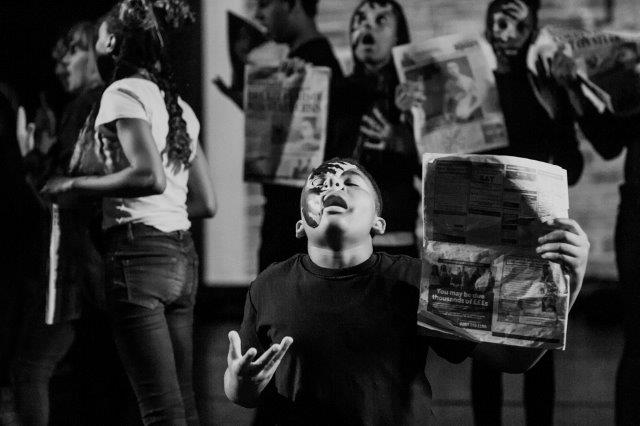 Haringey Shed took some of the young people on a summer weekend away as part of their Residental programme. The trip was fully funded and very popular with the young people. ‘They get out of London and use the tube and the train. They need to pack their own clothes and manage their own diets which gives them some independence. We get them out into the countryside. Lots of the young people wouldn’t get away at all in the summer otherwise.’

Two of their biggest performances this year were The Dividing Line, a big theatre production that was performed at the Bernie Grant Arts Centre in April, and Boxed In, which was written and performed by their 1419 group and utilised the studio space at the Irish Centre. ‘The Dividing Line was our first two act show. It was very script heavy, which involved a lot of memorising… we challenged the young people to tell a complex story, full of different locations, with the narrative going to different places.’

The youth theatre are currently working towards their next main production which will be shown in April 2018. This December they are putting on an event called Shed Jam, an open mic night led by the young people and headlined by their own band.

To help raise funds to support their projects and activities, Haringey Shed created the 100 Challenge Club which began in May this year and will run until May 2018. Their aim is to raise £100,000 through 100 sponsored challenges throughout the year. Some of the activities have included fun runs, marathons, bike rides and a sky dive.

We asked Ashling what it was like to work in the heart Tottenham. ‘Tottenham is very unique and the young people that are here are very proud of Tottenham and very connected to Tottenham. I think what’s so special about the area is it’s really mixed so you’ve got people from all different backgrounds. I know there’s mixed feelings about regeneration, and there’s mixed feelings about being different to the other side of the borough. I always think that we’re in this area for a reason and we aim to respond to the young people and help raise their aspirations. There’s a lot of young talent in Tottenham and the right opportunities need to be created.’

Ashling sums up: ‘Haringey Shed gives young people a safe space and a regular place to go. It gives them somewhere different to school and home where they may be typecast or put down. We give them an opportunity to be whoever they want to be. We’re not going to turn them away for being who they are. It’s really important that we give young people the opportunities to feel empowered and creative. To try something that they might not have the opportunity to do otherwise.’

#Repost @ten87studios ・・・ Thank you to @discovtottenham for their article about our journey so far. Including some great interviews with community members: ‪@lophiile‬ ‪@vyngface‬ @englebengle
Jazz at @thepostbarsevensisters @magpiesessions #thepostbarsevensisters
Finally grabbed a copy of Ten Drinks That Changed The World by @seki_lynch. The talented author and poet has performed at our events in the past. Check it out!
Street art underway near junction of High Rd and Monument Way. #streetart #tottenhamarts #sevensisters
Kept seeing people stopping and admiring the blossom on Tottenham Green East #dtspring #blossom #tottenham
Our friends at @idrisbarberingco have moved. Check out their shop at the back of @cravingcoffeeuk. Here's a cheeky snap of @tomforman_barber and a customer reading our mag!