On a fresh spring day we interviewed, hula hoop performer, instructor, roller skater and cabaret artist, Symoné outside Craving Coffee. We talked about how she got into hooping and roller skating, her Guinness World Record, her craziest performances, and how you should always stay determined.

As well as performing with numerous groups, including The Majorettes, Starship Hoopers (part of Chivaree Circus), Gypsy Hotel, Soul Sisters, Queerlective and alongside artists including Sun Ra Arkestra and Machel Montano, Symoné has appeared in music videos, teaches regular hoop workshops and classes and is a choreographer. In case that wasn’t enough, she was also in this year’s advert for Britain’s Got Talent.

For the last three years, Symoné has lived in various warehouses in Tottenham: ‘I remember when I discovered Tottenham, it was first just the warehouse… but I instantly fell in love because I’d been missing living around creative, interesting people.’ Originally born just outside DC in Northern Virginia, her father was in the military and growing up she moved around from country to country: ‘I grew up in so many different countries and cities that I kind of just feel like a nomad.’

Performing began for Symoné when she joined The Majorettes, a hoop troupe who were part of the Roundhouse, in 2012. She had been hula hooping for a year before that. ‘It was a short course to learn how to hoop with Marawa the Amazing, train with her and then the goal was to perform at the Olympic Park.’

‘We trained hard every week practising multiples, just upping our skills…’ For a performer just starting out, performing at the Olympics was a big deal: ‘I used to be a really shy person and to be on stage at that kind of event was quite scary, but exciting because I was around so many other girls and working with them.’

‘It’s so strange to look back at that day. I remember waking up at 6am and everything just being a blur; by the afternoon my mind was just blank. Being on stage I don’t remember, I don’t remember anything after, but just remember being in such a good state and, wow, it felt really amazing. I fell in love with it.’

Symoné discovered hooping when she was at a rave in America. ‘I saw two girls hooping and fell in love with it. I was totally mesmerised. I started doing it for therapeutic reasons; I wasn’t in a very good state in my life at the time so to learn that as a skill was completely for my own meditation and well being. Then, joining The Majorettes… I realised I love the whole spectrum of performing, being creative and expressive on stage. I genuinely think that when you’re on stage you can do anything. I love how powerful that is.’

‘Being a shy person, hooping, and then performing in general became such a release. To let out that extraverted side and it be ok. Socially, I just like staying in the background but, to let out all that energy on stage and that just being it, just five minutes of that and then closing the door to it, is really freeing.’

Symoné hoops and roller skates at the same time. This is limited according to the size of a venue or stage but she hopes to be able to do more of it in a new duo she is in. ‘I rarely get the right requirements for it so I have to compensate… I’m hoping in the next few months I can start pushing it and seeing where I can do it more. With the Soul Sisters group that I’m in, I’m definitely trying to push that because we’ve got a really fun skate hoop routine… disco vibes!’ 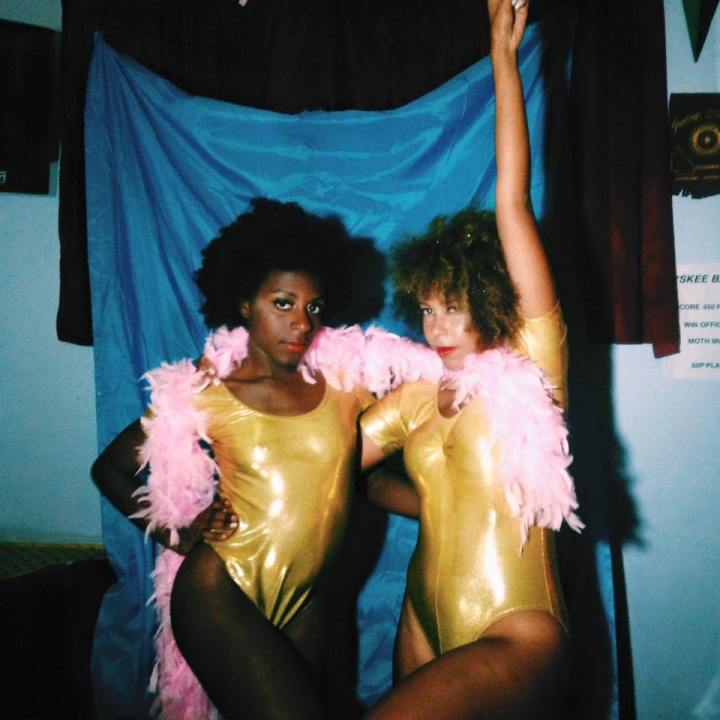 Symoné achieved a Guinness World Record with The Majorettes. The group had to train to spin 20 hoops at the same time. All the hoops had to be spinning on their bodies for ten seconds and they must stay below the elbows and above the hips. There are three chances to win a record. If one hoop dropped it meant a fail. ‘We had to make sure that we were all in sync and that was really tough training… there were ten of us that did the world record. And, yeah, we mastered it!’

‘Last year we were training to break our world record with 40, which we failed and that was really hard but I feel like that was definitely needed as a wake up call. We needed to train harder… but on top of that, failing just happens. We’ve had so many amazing opportunities and if something doesn’t happen then it helps you to build a stronger mind.’

A few years ago Symoné was introduced to Sun Ra Arkestra via a photographer she was working with, Gerald Jenkins, who was working on a photo book inspired by the band at the time. ‘When we first met he introduced me to the band. I’d never heard of them and he invited me to go to their concert at Cafe Oto in Dalston.’ Sun Ra Arkestra invited Symoné to perform on stage with them. ‘I don’t think I’d ever heard of experimental jazz before, obviously they’re a whole other genre in themselves how they are, but it took me to another world…. Being on stage with them was mesmerising.’

Symoné was excited to tell us about a new cabaret troupe she started working with last year called Queerlective. The group was put together by Duckie, who ran a summer school, Duckie’s Homosexualist Summer School, for the under 26s. Duckie is best known for the cabaret shows that have run from the Vauxhall Tavern for around 20 years. They are a group of 12 performers, ‘We’re a group of cabaret queers from around London with different skills… Some of us have done clowning, some of us are amazing singers, amazing dancers…’ In their first show Symoné was roller skating and lip syncing. ‘It’s very high energy, sexy, fun… we’re all very different… it’s just a mix of lots of cabaret elements in between a high energy dance.’

We couldn’t help but ask Symoné what some of her craziest performances have been. ‘The Majorettes got a call to do a gig in India. Can ten girls come to India for a weekend for a wedding? We had to arrange ten girls within a week, go to India, get a VISA, costumes. Within a week, having to get all that together, we went to India for two days. I’d never been and it was great timing as it was November. Over there it was sunny, it was warm, it’s beautiful. We went to New Delhi. They built the venue, it was a pop up venue, for this event…. We had to perform in these cheap eBay heels and the stage was really rickety… It was such a fun weekend, to just hang out with everyone, get to know them, and to work for such an amazing event. It was such a cool opportunity.’

Symoné also told us about an event she attended in Trinidad last year. ‘In February I was planning to go away to Portugal to completely disconnect from performing. To have a complete break for a month. Two weeks before I was supposed to go, I got a random call from a man in Trinidad, asking me if I wanted to perform for their concert. I was very sceptical. “For who?” “Machel Montano”, “oh ok, who’s that?”, I look him up, “oh I have him on my playlist”.

‘I got flown out to Trinidad to perform at a pre carnival concert, which is one of the biggest concerts in the country. It’s pre carnival so everyone in the country goes there. It’s called Machel Monday… I did one hoop show to a song called Hula Hoop and it was a soca remix with Machel Montano and Omi. I did one routine with them and that was it. It was such an amazing experience. I kind of felt like a princess. They were very friendly, lovely people to work with.’

Symoné also gave us her top tips on training: ‘If you want to learn how to hoop, you can hoop. It’s all in your mind. If anyone ever says: “I can only do one hoop”, or, “I can’t hoop at all”, “oh I couldn’t do that,” it’s only because they believe that. I say that with such reassurance because when I started hooping, I was at such a basic low level with coordination, balance, flexibility, but I was determined to learn how to do it.’ 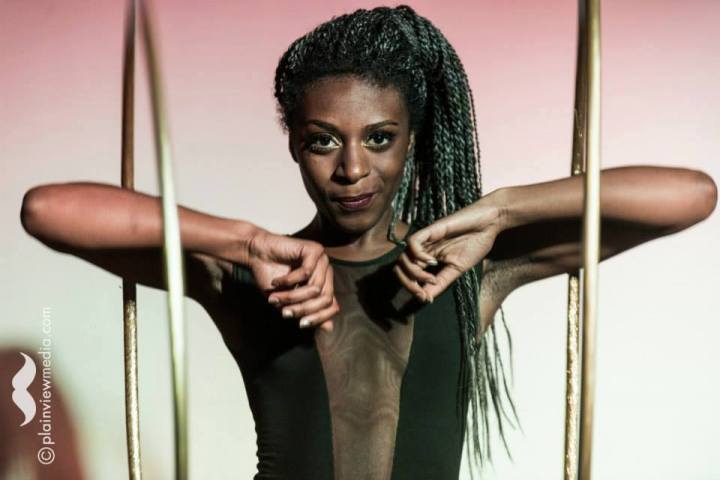 We discussed some of the changes happening in Tottenham. ‘I love Tottenham but I’m also slightly nervous about the changes of it because I feel so at home here. It’s such a down to earth place to be in London… There are issues in the area but for there to be such a big artist community… is great.’ There are events, ‘like open warehouse day [on Fountayne Road], and then there’s these artist hangouts that are happening at Styx. There’s also the theatre [Bernie Grant Arts Centre] so there are arts and cultural things happening here which I’m grateful for… It doesn’t matter which generation you’re from, young or old, it’s so important to stay creative.’

‘I fear the change of chains. I fear commercialisation, but thankfully it’s happening slowly here… It is what it is now and it’s great that we get to see it this way.’

Symoné teaches hula hoop classes and workshops and started teaching fitness hooping via The Majorettes. Marawa showed them how to teach a class called Hooptone: ‘intense hoop fitness with fun music. It’s dancey and open to all levels.’

‘I really love fitness hooping. It’s really important to be very fitness oriented when you want to train but I also just love dancing with the hoop. I’ve met hoopers in a lot of my classes who want to learn tricks and want to learn dancing, not just fitness, so I’ve created a brand called Hoop X Dance (hoop vs dance). We integrate dancehall, we do vogueing, we do choreography, as well learn tricks. I always encourage them to create their own sequences to be creative with the hoop, to be playful, to be like a child.’

‘I do workshops as well. I collaborate with a voguer named Jay Jay Revlon, and a dancehall performer and teacher Sophia Mackay. We’ve created Hoop X Vogue and Hoop X Dancehall which are 3 hour long workshops of intense dance incorporating the hoop.’

‘It doesn’t matter if you perform professionally or if you just do it for fun, you will always have something to learn…. I love that it’s such an amazing journey. To constantly keep building skill and keep discovering, “wow, I can do this with my body”, “wow, I can do that with the hoop”, “I didn’t know I could do that.”’

Symoné teaches hoop classes every Sunday at 1pm and Monday at 6pm at The Hive in Dalston. https://www.symoneperformingartist.com/classes