Ahead of our event at The Antwerp Arms on Thursday 26 July we had a chat with one our performers, Amahla. Reserve your free ticket on Eventbrite and see an array of musical talent from in and around Tottenham.

When did you first get into music?

I started playing the guitar when I was aged 15 and I started playing the piano from the age of 8 because my neighbour gave piano lessons… I got a bit bored of that quite quickly because I didn’t feel like I could write songs on the piano. I felt it was easier to write songs on the guitar. With the guitar I could play really simple stuff and the voice was front and centre. Ever since then I’ve done performances. I did performances at school, during sixth form and I did a bit at uni.

What did you study?

Anthropology so I wasn’t really involved in the creative arts. I really appreciated going to university because I now have opinions on life… I’ve met so many new people, I have subject matter to talk about, it’s not like, ‘oh I love you, you don’t love me’, sort of love triangle stuff.

When did you start singing?

I’ve been singing since I was a child. I’ve always done it so when I started to learn instruments I just sang with them and eventually people started saying that I was good, but I was so shy.

What’s you relationship to Tottenham?

I have family here. I was born in Hackney – I’m from Stoke Newington, so I can walk to Tottenham. My godson and uncles and aunts live here. I used to come up here all the time as a kid with my family so Tottenham is definitely a part of my roots.

What do you most enjoy about performing and making music?

What I most enjoy about performing is making an emotional connection with somebody that you don’t know. It was always quite a nerve-racking thing, as I was so shy as a child, to get up and perform in front of people but I always made myself do it and in turn that helped my confidence grow generally in life.

Making a connection with somebody else by doing something that feels so natural to you is absolutely phenomenal, no matter how many people in the room, no matter who it is, if you can get somebody at the back of the venue to stand up and listen to what you’re saying or singing, I think that’s incredibly special and I love that so much. Performing is amazing.

Making music is similar. I released my debut single a few weeks ago, I’ve been playing and performing live for ages but that was the first official thing I’d put out. I was actually quite surprised how people connected with the music. Even though they haven’t seen me, they just found me online, they just feel this automatic connection with it. The song is about nostalgia and growing up and associating music with a time in your life. I think it’s so amazing that my music is going to be associated with a time in their life – that’s really exciting.

Have you always written your own music as well? 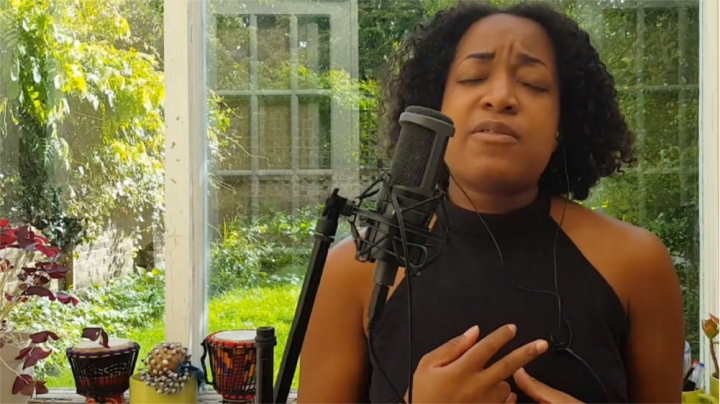 Can you tell us a bit more about your debut single Old Soul?

I wrote Old Soul in March this year. I’d been playing the chords at home and I thought ‘oh this sounds kind of cool’… but I hadn’t really known what to do with it. I was doing this artist development course at the time so I went in and played some of the music to my tutor and he was like ‘it’s a bit basic.’ I was a bit p*ssed [off] and I left and went upstairs into one of the writing rooms. I played the chords again and I started putting it on loop just to figure out where I could go with it. I think he just wanted to push me. When you’re an independent artist you just need somebody else to say ‘you could do better.’ I think that’s what I needed at the time because at the end of that 10 minute writing session I’d written the song pretty much in its entirety.

Wow, that was fast!

For some songs it takes longer, especially songs that have a lot of chords in them and have a complex song structure… but this one just felt and flowed really easily. I think it was something I’d always wanted to say and needed to say so it just came out.

Essentially the song is about my personal journey, but also relating to other people’s personal journeys in finding music that is from a past time and also reflects huge subject matters, like civil rights with Nina Simone, and some of it is about racism like with Otis Redding… I didn’t necessarily feel that some of my friends or friends at school felt the same way. I always had these artists in my collection and other people were listening to more pop and mainstream stuff. This is a song about how much that had inspired me and how much as an 18 or 19 year old girl I felt I could relate to them, even though it wasn’t in the same context.

How do you get into the mindset before a gig?

For me it’s not necessarily about having a mindset because the way that I am on stage is pretty much how I am in person. It’s really familiar, a bit jovial, a bit of a laugh, a bit of fun, so I don’t really have to think too much about how I present myself on stage. It’s more about putting in the work behind the scenes and rehearsing and practising. As long as I know I’ve rehearsed every day for the previous two weeks before the gig… I know even if something were to go wrong I can cope with it. It’s not necessarily about getting in the frame of mind because for me you should already be there by the time you’re about to go up there. Just have confidence in yourself and that comes from rehearsal.

In your bio, you mention that your politics are tightly wrapped up in your lyrics. Can you tell us a bit about that?

In a similar way to some of the artists I quote in my songs, Nina Simone, Billie Holiday, Otis Redding, that sort of stuff, I want to reflect what’s happening around me and the change that’s happening around me. In one of my Acappella songs, that I wrote a couple of months ago, it talks about gentrification. Growing up in Hackney… there’s been such a huge change around the ownership of properties, the demographics of the borough, and obviously the same in Tottenham. Music is a huge and really important way to open that dialogue with people… I want to be able to reflect what’s happening around me. We are in a huge period of transition. It’s so fast and sometimes you can’t capture it so if I can just capture this one moment, this one year of my life, in a song that hopefully lasts forever, it’s like a time capsule isn’t it?

Can you tell us more about the EP you are releasing next year?

That’s going to come out towards the end of January. I’m releasing my second single in September. It’s called River and that one is about social media. It’s about getting sort of caught up, particularly on Instagram, in how great other people’s lives are and a sort of reassurance that your time will come. You don’t have to look at the status as where everything is happening and where activity is created when, in fact, you’re doing enough and you are enough at this point.

What are you most looking forward to about the DT gig?